The weather was so nice on Friday that I went down to the River Festival on its opening day to check out the action. I got there as the parade was going on. My kid and I stayed through the evening symphony concert that followed as well as the fireworks show.

I got there just as the airmen from McConnell AFB and their dependents walked by. 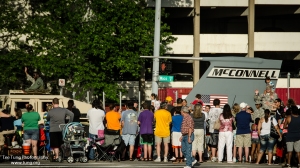 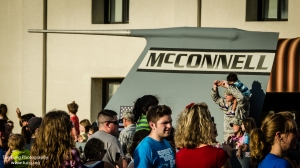 Various groups and businesses around the city were participating in biggest community parade of the year….

Here comes the Wells Fargo wagon; I wonder he brought for me….

Several cheer squad teams were in the parade….

The Wichita Symphony Orchestra put on their public Pops concert like they do every year, which always concludes with Tchaikovsky’s Overture 1812, complete with cannons operated by the Kansas National Guard and a fireworks show….

While the concert was going on, I walked up along the bank of the Arkansas River to find a good vantage point for taking long-exposure shots of the fireworks. I forgot to bring my tripod, but I had my collapsible lawn chair with me, so I collapsed it and used it as a makeshift platform for my camera. I propped up the lens with the chair’s carrying case that I wadded up into a shim to place under the lens. I was positioned right next to the water so I was careful not to accidentally tip over the teetering “tripod” and watch my camera go into the drink….!

I changed locations twice while the fireworks were going on so that I could include the Exploration Place science museum in the photos…. 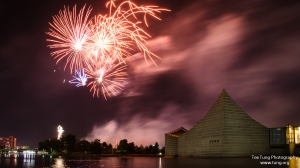 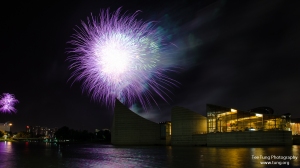